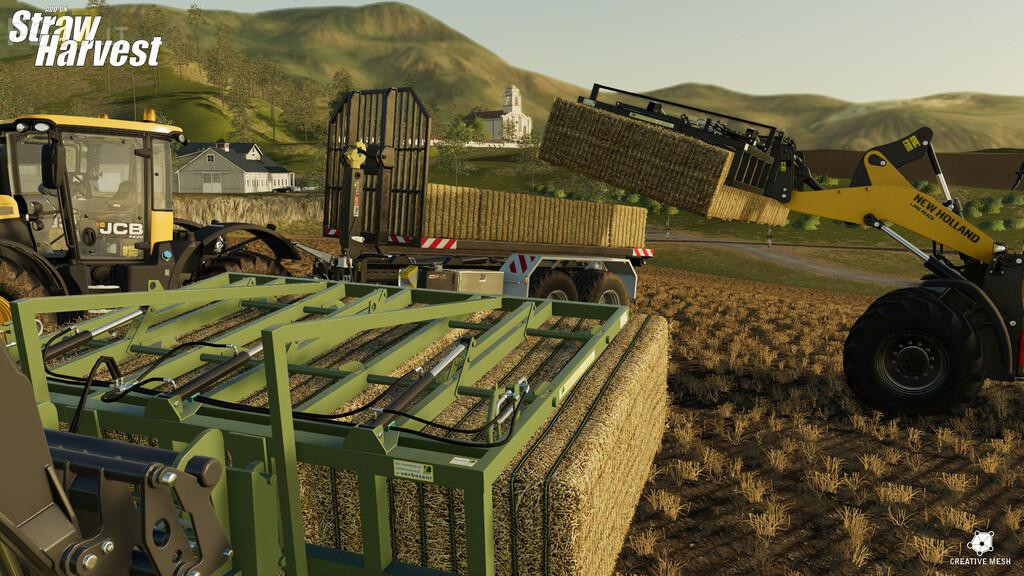 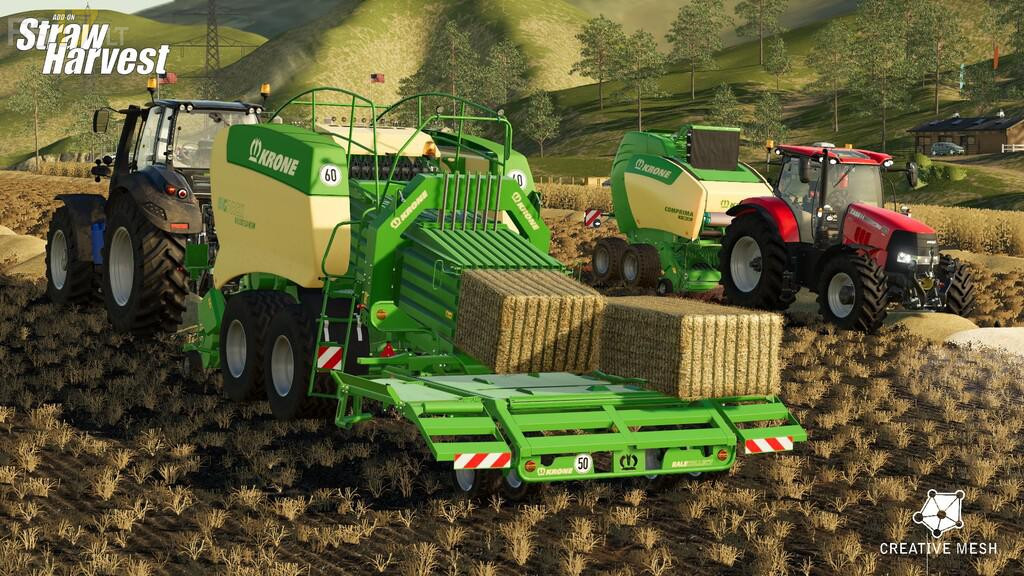 About mod:
Expand your farming operation with the pellet industry and increase productivity with powerful machinery from Krone and Bressel und Lade, included in the "Straw Harvest" addon.

The world's first mobile pellet harvester, the Krone Premos 5000, can produce pellets by collecting straw or hay swaths directly from the field, or can be operated stationary with the additional bale shredder. The produced pellets can be sold, used for animal bedding, fed to animals, or you can choose to process them in the included industry hall.

The Krone Big Pack 1290 HDP II and Krone Comprima V180XC are the balers of choice for a powerful straw harvest. With the attachable Krone Bale Collect, the Big Pack can unload stacks of up to three square bales at a time. Additionally, the Comprima also comes with a variable round-bale size options.

Because the Krone Big Pack, Comprima, and Premos need bale yarn, netting and molasses in reality, this feature can now be added optionally via shop configurations to add to your virtual farming experience. When this option is enabled you will have to buy the consumables pallets in the shop.

Handling bales is easy with the included bale grabs from Bressel und Lade and Lizard. These grabs come in various sizes for front loaders, telehandlers, and wheel loaders. They grab and hold the bales while moving and only release the bales when you want them to.

The included industry hall can be configured in three different ways. You can use it as an empty hall for parking your vehicles and storing bales and pallets. Add a hall crane to make moving bulk material, bales, and pallets easier. You can also add an automatic palletizer to further process the pellets created by the Krone Premos 5000. The pallets filled with pellets can then be sold at a higher profit at the selling station, which is also provided with the addon.

Additions:
- Added compensation pellets on the mixer wagons.
- Added work lights to BaleCollect.
- Added missing decals to the HDP.
- Added support for dynamic mounted objects for the crane tools to avoid object intercepting cause of removed physics.
- Allow selling bulk pellets at selling stations that support hay or straw.
- Added compatibility tweaks for the selling station.
- Added controlGroups to Premos and BaleShredder.
- Changed selling station to ONLY accept pallets that can be sold with a bigger profit as bulk.

Balances/Tweaks:
- Increased heap size when unloading Premos.
- Balanced pellet prices for gameplay.
- Tweaked weight of BuL_B50AR03.
- Allow palletizer to finish the pallet when there are enough bags left on the line when the buffer is empty.
- Increased tip collision of the halls.
- Adjusted supports on bale shredder assuming ground is level.
- Decreased powerConsumption on HDP.
- Tweaked the Premos pickup area.
- Updated pickups to make them more compatible to REA.
- Visual and translation tweaks.