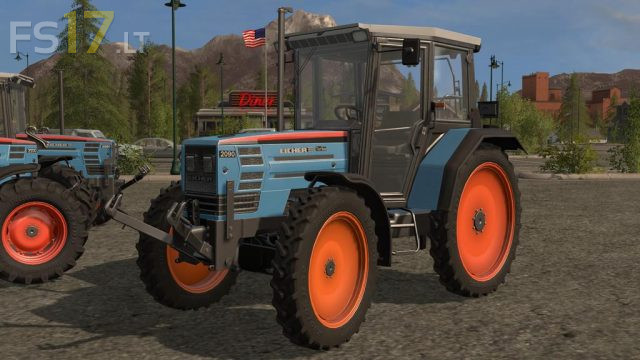 Details about the original machine:
The bavarian tractor manufacturer "Eicher" was struggling to keep afloat since the mid '70s when they made a few bad business decisions such as buying too much stock of transmissions or going into cooperation with massey ferguson. By the end of the '70s MF did have control over "Eicher" and the first plans of using the aircooled Eicher engines with MF transmissions were long thrown over board and what left production lines was pretty much MF tractors in blue paint. Obviously this didn't save "Eicher" as the farmers didn't want watercooled engines, so the company went bankrupt.
After that, several attempts were made to get the company going again. One of the last attempts was a cooperation with "Same" from Italy. The idea was, again, to use aircooled Eicher Engines with the "back end" of Same tractors to save cost. But as development continued funds ended and weren't even enough to engineer the parts needed to couple Eicher engines to Same transmissions. So in a last attempt the company sold complete "Hürlimann" (also owned by Same) tractors in blue, but they were 100% identical to the Hürlimann tractors H488 and H4105 Elite except the color and decals. No surprise it didn't save Eicher and not many were sold. Eicher went bankrupt the last time in 2001 although the daughter company "Eicher Goodearth" in india founded back in the late '50s is still going strong, now part of the "TAFE Motors and Tractors" producing the legendary Eicher aircooled engine and still a few Tractors with it.