On 23 and 24 February Focus Home Interactive published Farming Simulator series games. Farming Simulator 2017 is still in developing. In this article you will know, what’s new will be in this new version of FS game. 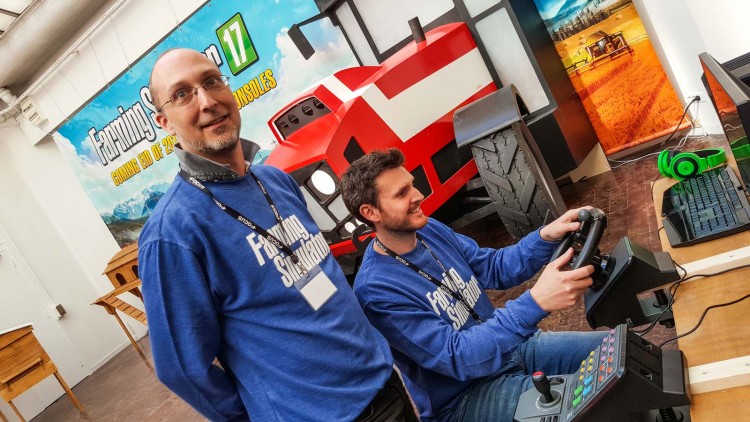 In a scene “type of Eastern Europe”, you thrive in an environment somewhat similar to Farming Simulator 2015, and will not be confused beyond measure. Emphasis was placed on the use of the graphics capabilities of consoles and PC (no Mac version announced) of past generations. And the least we can say is that, visually, the game is particularly successful. The models of the machines is breathtaking as the level of detail is high and true to reality. Normal when one learns that the manufacturer provide themselves the 3D model.

The external environment is subject to climatic variation. As the game engine has been revised at the lights to push the realism far beyond the previous version. Just see your sunflower field point to the sun in real time to realize it.
Regarding equipment, it announces a renewal of the fleet of machines with the latest hardware available in concession. Anyway, if you are familiar with the franchise, you are aware that the game is evolving and that many “mods” adding new (or old) equipment regularly landed on the official website of the publisher. Note, however, the arrival of such Pickup car for a walk or ride a “lil wood” Suddenly chainsaw in the forest, one of the novelties of the game.
Multiplayer is always in the spotlight, without being able to know too much. It is obviously possible to play and manage its operations to several (we will even see a virtual Gaec slew form). Solo mode is meanwhile still lacking campaign, leaving the player completely free of his actions.

Some downsides
During the presentation, and frankly share improved visual appearance, we wondered what were the great new (Remember that the game is not finished yet). We would try to say that this version of 2017 would be the version 2015. The game itself is always reserved for a public insider and enthusiasts. The opening to the public could be more relevant with the addition of a campaign mode, which will guide the player to “missions” rearing or culture.

As for physics, it is still far from reaching a good level of realism. “Everything is very heavy, it is complicated to manage,” we admit the developer. In short, the release date is scheduled for late 2016. It remains to this day the farm simulation game the most comprehensive and the most successful. Farming Simulator 2017 promises even (very) long evenings online to harvest!