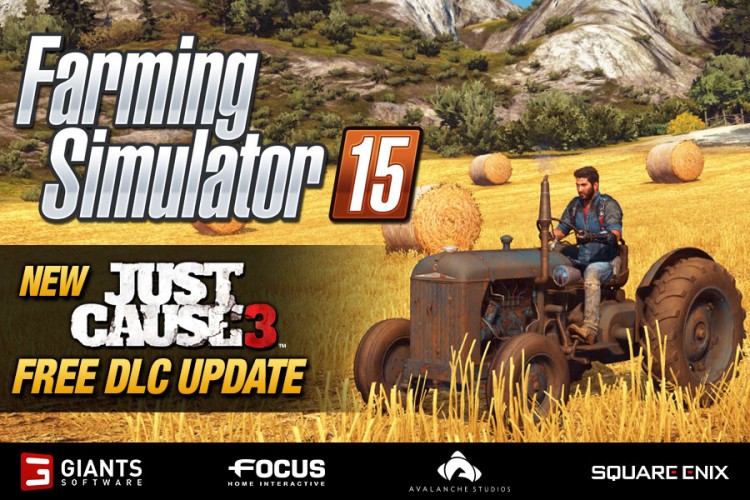 Fresh from his latest assignment to overthrow a vile dictatorship in his beloved homeland Medici, ‘Just Cause 3’ hero Rico Rodriguez is taking a break from destruction – he’s now trying his hand at tending the soil of Farming Simulator 15 in a FREE DLC UPDATE.

Coming this summer, Just Cause 3’s iconic STRIA RUSTICO tractor will debut in Farming Simulator 15. Repurposed by Rico to aid the rebels in their revolution, Just Cause 3 showed that there was nothing that the Rustico couldn’t do, now it’s time to see what its trademark havoc causing can bring to the world of harvesting.

The Rustico being the latest in a long line of fantasy inspired agricultural rides that Rico could borrow in the Just Cause series. Known as the “Medician workhorse” the Stria Rustico could be seen throughout Medici working the fields and was pride of place at many farmsteads in the glistening Mediterranean paradise.

Long praised by Medici’s Ministerio de l’Agricultura for its reliability and unprecedented haulage, the Rustico will be adorned in its sun weathered coat of paint from Just Cause 3, but that is not all… As the Rustico comes to you straight from Medici, this version will be equipped with nitrous boosters as per Rico’s specification adding an extra layer of danger and excitement to your ploughing– it’s pretty difficult to pull off contour farming whilst being propelled uncontrollably at speeds of 80mph or more.

Using the Rustico will also change your farmer’s appearance to that of Medici’s favourite son Rico Rodriguez, hero of the Just Cause games complete with his famous grappling hook and wingsuit (hopefully your tractor doesn’t get airborne, but then with Rico anything is possible).

The Just Cause 3 DLC for Farming Simulator 15 including the Rustico and Rico farmer skin will be available on PC, PS4 and Xbox One this summer.

Do you want to see this DLC in Farming Simulator 17? Write in comments! 🙂

3 thoughts on “While you’re waiting for a FS17 mods”